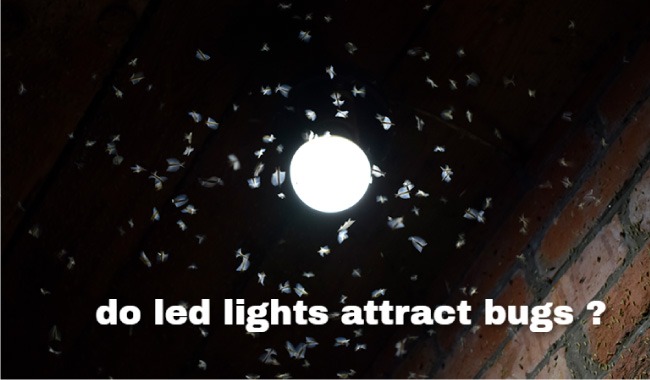 The LED lights are an essential component of outdoor and indoor lighting; you need LED lights for the porch, garden, and backyard for a wide range of movements. For parties or home gatherings, every activity requires optimum lighting, and LED delivers the best.

There is a current dispute that LED lights to attract insects and bugs or not? The fact is no light can repel bugs and other insects. The essential information is bugs are attracted to color spectrums and not the medium. The manufacturers cannot guarantee that their fixtures are bug-free. Specific colors always have attracted insects and bugs.

We know that the human eye can see a specific amount of electromagnetic radiation. The range falls under the range of “visible light,” which is between 400nm to 700nm. The bugs also come in this range. They can only see a specific spectrum in the absence of natural light.

Most of the bugs and insects are attracted to three colors spectrums green, ultraviolet, and blue. The bugs usually have an attraction towards shorter wavelengths which are between 400nm to 600nm. They are also attracted to the temperature or heat of the light bulbs, which emit ultraviolet (UV) rays. The luminance power of the light source should be 1100 to attract bugs and insects.

Most of the bugs and insects are inactive during the daytime due to too much heat, but at night, the activity increases due to the coolness of the air.

The bugs and insects disturb the outdoor environment, which is done under the lights. The insects accumulate in front of the light and create an obstruction. In the winter season, the bugs seek the warmth of the light. There are several types of reasons of which insects get attracted to the light source.

Don’t get confused with BUG Rating – BUG rating is the standard term for Backlight, uplight, and glare ratings. It has nothing to do with insects.

What kind of lights does not attract bugs?

LED lights are mostly less attractive to bugs and insects as they produce long wavelengths and less heat.

Moreover, they emit less or next to no ultraviolet rays. This is the reason LED lights have become a perfect choice for the outdoors.

The worst that could happen is outdoor lighting supported by traditional fixtures. Some of the LED lights can be coated with additional layers to decrease ultraviolet rays and blue spectrum and reduce the influx of insects.

LED bug lights are different from LED lights and feature a yellow color (warm color) with longer wavelengths. The LED bulbs with less heat emission is the best option to repel the presence of insects and bugs.

Improving the manufacture of LED lights with better heat preservation and proper dissipation helps expulsion bugs. As a result, the LED lights work better than the conventional fixtures.